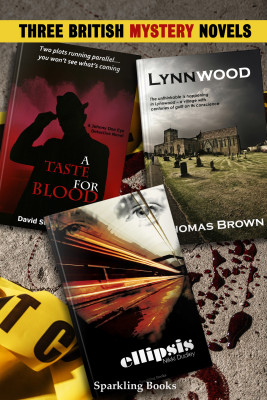 Lynnwood, by Thomas Brown, set in the New Forest, was listed for the 2014 People’s Book Prize;
A Taste for Blood, set in and around London, by the acclaimed Sherlock Holmes expert David Stuart Davies;
Ellipsis, set in London, a psychological thriller by Nikki Dudley.

Three great reads, for those who like to wrap their minds round unusual plots. Presented in one e-book bundle.

Lynnwood, by Thomas Brown, was a finalist in the People's Book Prize

The unthinkable is happening in Lynnwood – a village with centuries of guilt on its conscience.

Who wouldn’t want to live in an idyllic village in the English countryside like Lynnwood? With its charming pub, old dairy, friendly vicar, gurgling brooks, and  its old paths with memories of simpler times.

But behind the conventional appearance of Lynnwood’s villagers, only two sorts of people crawl out of the woodwork: those who hunt and those who are prey. Visitors are watched by an entity between the trees where the Dark Ages have endured to the twenty-first century. Families who have lived behind stone walls and twitching curtains know that the gusts of wind blowing through the nearby alluring Forest bring with them a stench of delightful hunger only Lynnwood can appease.

A Taste for Blood, by David Stuart Davies

Featuring private investigator Johnny (One Eye) Hawke, and his one-time colleague in the police force Detective David Llewellyn. Llewellyn is investigating the chilling crimes of a top psychiatrist and his scheming patient who the doctor believes has knuckled under his authority. In the meantime, Hawke is on the case of a mysterious suicide in Edgware Road... soon discovered as not your average suicide.

The guts and insight of the two investigators bring both cases to a head - though you won't even begin to see how until you have turned the last pages.

"Right on time," Daniel Mansen mouths to Alice as she pushes him to his death. Haunted by these words, Alice becomes obsessed with discovering how a man she didn't know could predict her actions. On the day of the funeral, Daniel's cousin, Thom, finds a piece of paper in Daniel's room detailing the exact time and place of his death.

As Thom and Alice both search for answers, they become knotted together in a story of obsession, hidden truths and the gaps in everyday life that can destroy or save a person.

Ellipsis is a disturbing thriller stemming from what is left unsaid, what bounces around in the mind and evaporates when trying to remember. Can there be a conclusion when no-one seems to know the truth?