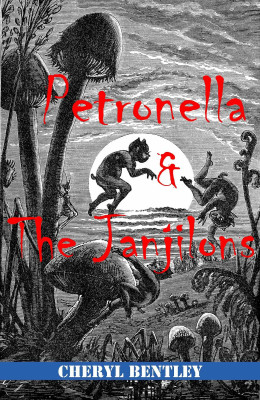 The Janjilons are not what they seem. They look like a type of monkey but they are really children. How did they turn into Janjilons? And could it happen to anyone?

Behind this mystery is someone evil, Judge Ormerod who wants to be the next Duke of Westshire. With the help of three weird sisters, he has to rid the land of clever children from being an obstacle to him. The Janjilons work for him as the three sisters mete out punishment and keep them locked up.

Petronella starts to look into these strange happenings. But time is running out because when the Judge no longer needs the Janjilons, they will be destroyed.

“What happens next? You’ll have to jump on this fast moving fairy tale thriller to find out!” - Bill Baker, Maine, USA

"There are three witches, a hidden school and a lot of evil in this story.  You'll meet characters that will surprise you and the ending is great ... Ms. Bentley does not write boring books.  I can see a young one reading this book more than once.  Maybe they can even write a story of their own..." - Jo Ann Hakola, The Book Faerie

“A fun and exciting tale of mischief and the resulting troubles, of problem solving and the outcome of working toward a goal.” - Linda Barrett, Bookseller, USA

“Petronella and Edmundus Chewnik live in their Manor House in Fort Willow. Their friend, the Duke of Westshire, a fair and heir-less man, has just died. Before going, he left explicit instructions as to how the next Duke will be chosen. The problem is, one of his councillors (as the British spell it) wants that dukedom more than he can fathom. That’s when the trouble starts.

“It seems that the boys of Fort Willow are all being offered free places at a nearby boarding school. Most parents here can’t afford it, so they jump at the chance to educate their sons at a prestigious school. But Soloman, the local orphan, doesn’t think anything good is going on. So he enlists the help of Petronella to see if she can sort things out. But before she can get started, Soloman is discovered in the woods by three witchy types and the judge who was responsible for sending the boys off to school. Unfortunately, they see him, and he soon learns of their nefarious plans.