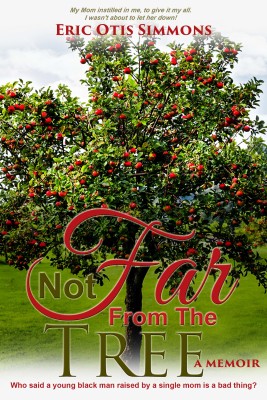 Not Far From the Tree

Not Far From The Tree is a son’s story about the impact his single African American Mother’s teachings had on him and how he used her valuable lessons to go on and excel academically, athletically, and in Corporate America.

In “Not Far From The Tree,” Simmons’ Memoir, he shares his life story through a series of smaller stories that range from shocking to calamitous to sorrowful to triumphing.  Eric takes you through how he stumbled across a court document revealing his Dad’s surname was actually Bailey and how off guard that caught him.  He jokes about the time his Grandmother caught him and his cousin peeing out of a window, and they both lived.  Simmons also opens up about the tragic loss of his daughter and the frightening night his Mother was assaulted at gunpoint and his ensuing years-long anger. You’ll walk down the hall with him through the secret tunnel underneath Alabama’s State Capitol, where he meets Governor George Corley Wallace for the first time.  All he could think about was the Governor’s infamous words, “Segregation now, segregation forever!” Eric’s insight into his remarkable career in Sales/Sales Management with Fortune 500 titans IBM, AT&T, GE, and MCI, reveals his strive for excellence centered around opening doors for other minorities.  Throughout his Memoir, Simmons masterfully ties together his Mother’s teachings with how he utilized them to overcome seemingly insurmountable odds to achieve academic, athletic, and business success in Corporate America.

“If you love inspiration, heartfelt stories, and laughter, this book is right up your alley.”

“It’s a must-read for young and old who were or are being raised by a single parent. I give it 5 stars and plan to purchase more for sharing.”

“It’s a quick look into an accomplished man’s life that will leave you inspired to be bold and go after the things you want in life.”