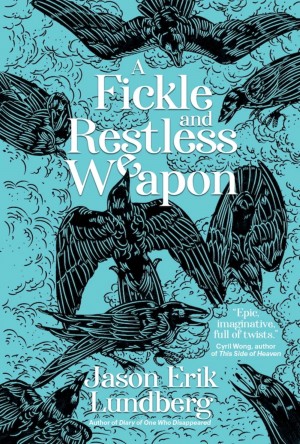 A Fickle and Restless Weapon

Quek Zhou Ma, a performer who goes by the stage name Zed, returns to the island-nation of Tinhau after a long absence to attend the funeral of his older sister. As he deals with conflicting feelings about a homeland he hardly recognises, he decides to produce a lavish production with the Ministry of Culture, but opening night is marred by a bombing attributed to a local resistance group, Red Dhole.

He meets Tara, a graphic designer with the Ministry of Culture who finds herself uneasily associated with Red Dhole. She is charged with bringing Zed over to the cause, but as the pair grow closer, she doubts whether she can complete her task. Meanwhile, Vahid Nabizadeh, Zed’s creative partner and a master puppeteer, finds a new home in Tinhau, but he becomes embroiled in political and financial intrigue that threatens to unbalance the stability of the government.

As Zed, Tara and Vahid struggle with their disaffected identities, Tinhau is abruptly attacked by the Range, a mysterious cloud formation that appears without warning and destroys without mercy, a weapon as fickle and restless as the human mind.