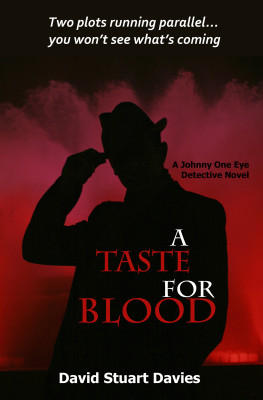 A Taste for Blood

The sixth novel in the Detective Johnny (One Eye) Hawke series.

Two laser-sharp detectives, two thought-provoking cases and two skilful plots.
Featuring private investigator Johnny (One Eye) Hawke, and his one-time colleague in the police force Detective David Llewellyn. Llewellyn is investigating the chilling crimes of a top psychiatrist and his scheming patient who the doctor believes has knuckled under his authority. In the meantime, Hawke is on the case of a mysterious suicide in Edgware Road... soon discovered as not your average suicide.

The guts and insight of the two investigators bring both cases to a head - though you won't even begin to see how until you have turned the last pages.

“This is a delightful read because you are not quite sure what will happen and you are hooked enough to keep on reading. Enjoyable.”  – J Robert Ewbank, author

“A well crafted thriller that had me gripped from the first chapter. I tend to be a fussy reader who is easily bored with so called thrillers that fail to live up to their billing. A Taste for Blood far exceeded expectations with its carefully crafted plotting and characterization. So good were these that it encouraged me to read the novel a second time.

“I had not read any of David Stuart Davies but now am eagerly waiting his next titles. Comparisons my be made with other novels in this genre such as Silence of the Lambs but Davies has produced a work that whilst being less extreme becomes more fearful through its naturalness.